I’m a Linux user for a little more then a year. I always favoured Debian and Xfce, but I really tried out a lot of distros, and some desktop environments. But I like Debian for it’s stability, and Xfce for it’s nice design but fast speed. Last month the Xfce team released the next stable 4.6, with a tons of nice features I wanted to try out. Debian still has no packages from that, but yesterday I felt really brave to compile it. I went for the graphical install package which is an easy way to install it. It had a few dependencies, but since I got Debian installing dev packages goes really fast. After 30 minutes or so, I had the 4.6 installed and running. Almost. Because the new settings manager didn’t worked, and that’s the same reason the xfconf package is missing from experimental I guess.

But the new desktop menu was working, the session manager noticed the non-responding apps and lot of plugin improvements were there! But it was slow. The one out of the two reasons is gone. The XFCE team is walking a path to get closer to GNOME, they have a settings daemon, they use gstreamer and they will port thunar to gvfs. It’s not bad actually, because the GNU system is fragmanted as hell, some co-operation and standardisation comes handy. But it’s not the Cholesterol Free Desktop Environment any more. And it’s time for me to move on…

The next stop is LXDE. The Lightweight X11 Desktop Environment. Modular approach, little dependencies, sounds good. But I wasn’t fully satisfied. First Debian got the GDM with it, which is quite useless for me, because I already had some other autologin and xstarting method. So no thanks! And the panel is just ugly. It has no padding between the icons, adding space between the elements is not an accaptable solution. But it’s fast as lightning, and it’s elements can be used separately. I think it will be more mature with time, but now I don’t really like it.

If the most barebone desktop environment won’t do the trick, your only alternatives remain the different window managers. I tried Fluxbox. I thought it would be cool to be a real Linux nerd with a pure desktop, but I realized it’s not for me. But it gave me a great idea. What if I would combine some different elements to mix the perfect environment for myself? Like Fluxbox too needs some other apps, LXDE’s apps can be combined too.

So here is my magical mixture: openbox, lxsession, fbpanel, pcmanfm. Lxsession is essenial to have some logout, shutdown, autostart functionality, openbox don’t has any bonus features I don’t need, fbpanel looks nice and pcmanfm provides desktop icons and wallpaper. It turned out that lxsession don’t really needs GDM to handle the session, so I got rid of it, I installed some configuration tools, some configurations by hand, some autostart applications, and an xcompmgr to give nice shadows which I liked so much back in Xfce. It required a whole day to figure out all this, but now I got a nice desktop which boots up in 51 seconds. (In comparison to LXDE from Lenny repo: 55s)

And yeah of course the screenshot: 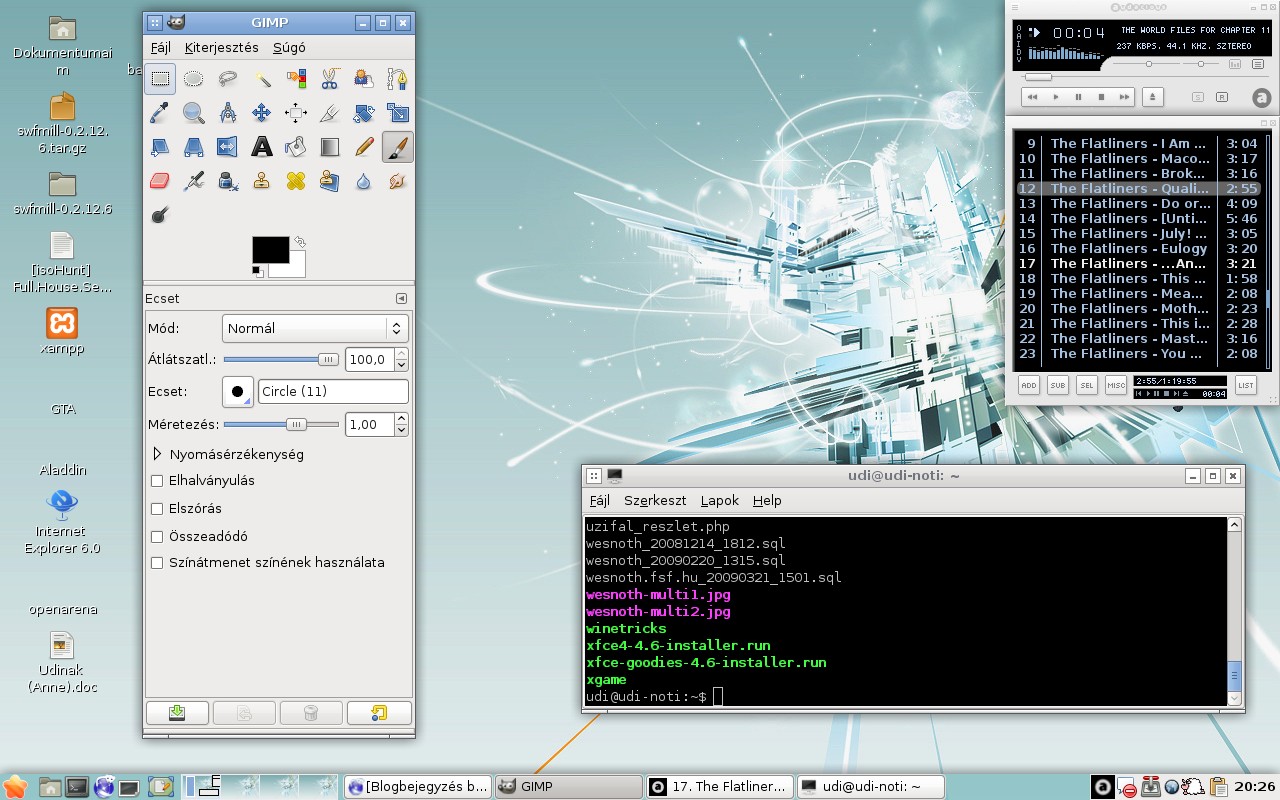 Update: I actually figured out, that lxpanel is based on fbpanel, but it got improved. So fbpanel is out lxpanel is in.

You may also enjoy